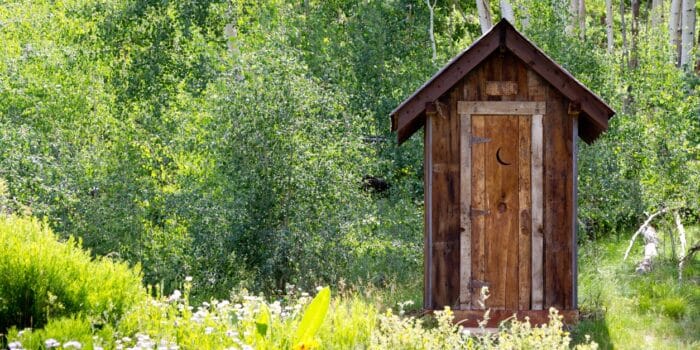 The history of human infrastructure is the history of humanity. From roads and bridges to huts and houses, our lives are informed by the technologies of our time. Plumbing and human waste management are certainly no exceptions!

Over the years, access to bathing facilities went from being a luxury to a necessity. Toilets went from being anywhere to being somewhere comfortable and private. And eventually, clean water came to us for a change and no longer required a bucket or a long march to a river.

Septic systems—now a widely enjoyed alternative to municipal sewage lines—started out as most great innovations do: as the solution to a common problem.

In France, during the 1860s (as in most of the world at that time) if you wanted to use the bathroom you had to go outside. Outhouses and latrines positioned over excavated pits were the norm, especially for those who lived outside of large urban centers. Outhouses kept the home free of unpleasant odors, and by depositing human waste directly into a hole in the ground, users were spared the cleanup.

Around this time, French inventor John-Luis Moras grew increasingly frustrated with traveling to and from the outhouse. In the dead of night or during the wintertime, leaving your warm home to reach the outhouse door was deeply inconvenient and uncomfortable.

Moras began to wonder if the toilet could be moved inside the home while the waste was moved outward and away. This would solve the problem, he thought, and shortly thereafter the first septic tank was made.

Moras built the first septic tank out of concrete—still a predominant material for septic tanks today. Clay pipes led from the toilet inside the home to the buried tank outside. The system worked so well that a decade went by before Moras disassembled his prototype to understand how well it worked.

After consulting a scientist, Moras began to perfect his invention year-by-year until the early 1880s when the first patent for the septic tank was filed. Not long after, the plumbing innovation came to America where it proliferated in usage.

By the middle of the 20th century, septic systems were common in the United States. The septic system’s reliable design made it popular with rural households and suburbs alike. As new materials became available, the septic tank improved. Though still made out of concrete, modern septic tanks are also made from plastics, PVC, fiberglass, and more.

Soil sciences and plastic piping improved our understanding of the water table and of the ways our waste management systems impacted the natural world. Septic systems were increasingly refined until we ended up with the design employed throughout the world today.

America is a large country with plenty of open space. Septic systems allow us to take advantage of that space and live as close to or far away from each other as we’d like. This may explain why over 60 million people in 26 million households rely on septic systems in America today. To say it another way, a fifth of all Americans live in homes with septic systems.

The developments in human waste management throughout the years have kept us healthier, granted us more freedom, and ultimately contributed to the average person living a longer, better life. If you live on a property with a septic tank today, you’ve got history buried right there in your yard!

Septic systems are too efficient, practical, and affordable to be going out of fashion any time soon. The more you know and understand about your septic tank, the more use you’ll generally receive from it.

With proper maintenance, your septic system may perform flawlessly for decades—not so unlike the first prototype created by John-Luis Moras in the 1860s. For all your septic system needs and questions, Economy Septic is here to help!

Get to know your septic system with Economy Septic!

You don’t have to know the history of the septic tank to get the most out of your own, but it certainly can’t hurt! Septic tanks add to the value of your home and keep shower, laundry, and toilet usage all running smoothly! To learn more about how you can make the most of your septic tank through the years, or to schedule maintenance, call Economy Septic today at (256) 435-1086!

Extreme Weather & Your Septic System – What To Know

In the US alone, over 60 million households thrive on septic tanks - a sustainable…

We all rely on public sewer systems in our towns to trap, filter, and dispose…